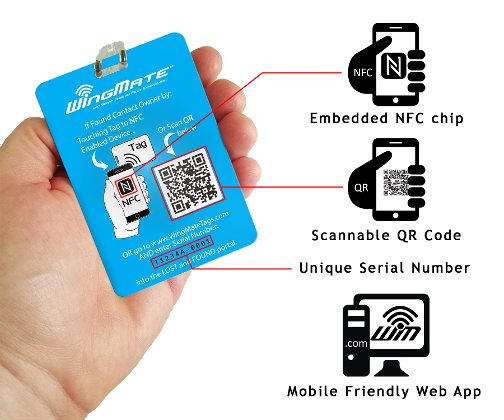 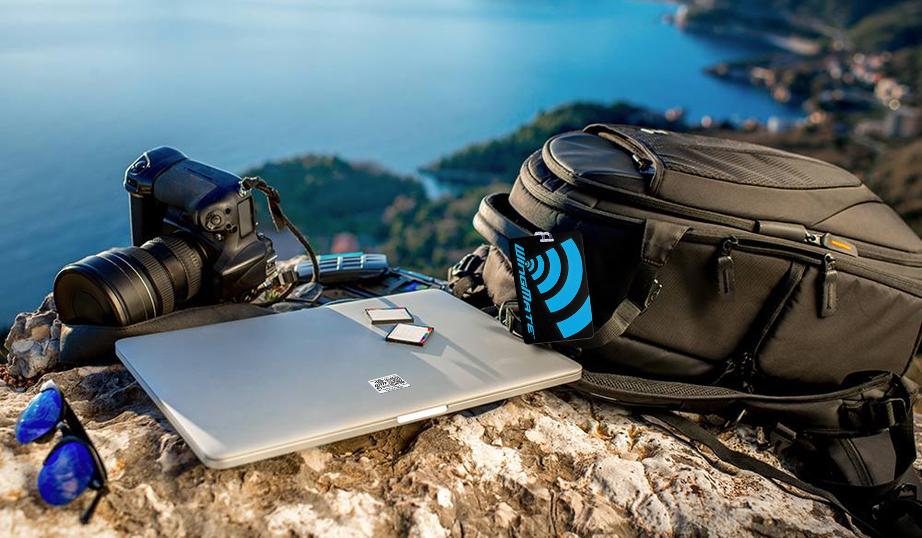 WingMate is a "Smart" tag that provides a secure way to store personal contact information on virtually any traveling valuable, such as luggage or electronics, and assists with the recovery of valuables when lost. Think of it as a transponder for your travel luggage!

Using NFC and QR Code Technology, WingMate is the most advanced Luggage Tag available. Never write on a luggage tag again and have your personal information easily exposed to the public, simply update your contact information with a click of your mouse or use your smartphone! Whenever your tag is lost, WingMate increases the effectiveness of recovering your lost articles. WingMate was developed by two airline pilots and is flight crew tested to be the best and last luggage tag you will ever need!

HOW DOES WINGMATE WORK?

Each WingMate tag is embedded with a NFC (Near Field Communication) chip that when read acts as the "key" to our cloud database. The information that you enter into your WingMate profile is securely stored in our database and may only be edited by you. Only contact information that you wish to be visible to others may be seen when accessed through our LOST and FOUND portal.  WingMate also uses QR Code technology that may be used when NFC technology is unavailable.

Whenever a tag is lost and then found, the finder touches the WingMate tag to a NFC enabled device, scans QR code, or goes to the URL on the WingMate tag. By using the NFC technology embedded into the tag, and entering the WingMate tags Serial Number into our online database, the person who found the tag may contact the owner using the methods provided on the owner's profile. In addition, you are sent an automatic email with the details of the find with a map of it's location and the contact information of the finder.

WHAT INFORMATION CAN WINGMATE STORE?

WingMate can store a magnitude of information such as:

With WingMate, you have control over how much or how little information others may see!

WHAT HAPPENS WHEN MY BAG IS LOST? HOW DOES WINGMATE HELP?

In the unlikely but unfortunate event your valuables become lost, WingMate makes it easier to recover your lost luggage or items.

Let's say you're traveling via airline and you accidentallyleave your tablet in the seatback pocket after deplaning. A likely scenario, right? You’re now checked into your hotel and unpacking only at this moment realizing you’ve lost your $300 tablet! You’re heart drops as you frantically double check every bag in your room, all awhile it’s on its way to the other side of the country! Before WingMate that tablet was as good as gone, especially if its screen is locked or if the battery is dead. Thanks to WingMate, however, a person who finds your tablet simply has to touch your WingMate tag to their phones NFC reader or scan the QR code on the tag. The finder is then directed to our secure online LOST-and-FOUND application where they may report the find of your lost tablet directly to you, putting its location on a map, and get in contact with you using any method you provided through your online profile or by WingMate Messenger. It's that simple.

We have made recovering your lost articles, not a matter of if, but when...

WingMate is the safe and easy way to store contact information on a travel tag and help recover your valuables when lost.

No, WingMate uses no batteries and no charging! The NFC chip embedded in the tag is powered when touched with an NFC enabled device.  As long as a person has internet access, WingMate's LOST-and-FOUND application may be utilized. This makes WingMate one of the most versatile and independent products available for protecting personal information and asset recovery!

DOES WINGMATE ACTIVELY TRACK MY ITEMS?

Nope! It's Free! Unlike other similar products out there that "charge-per-find" or "record update", WingMate subscriptions are complementary. Update your account as much as you want, or lose your items as much as you want (although we don't recommend the second part), WingMate offers unlimited database entries at no cost to you. If you already bought a WingMate tag under the old subscription plan, don't worry, your plan is now FREE with everyone else!

I HAVE AN iPhone/iPad, DOES WingMate WORK FOR ME?

Yes! With Apple unlocking it’s NFC API in IOS 11, WingMateTM NFC technology may be used with iPhone 7, 2017 iPad Pro, and later devices. iPhone 6 and earlier, and older iPads may still be used by scanning the QR code. The QR code has the same functionality as the NFC chip.

DOES WingMate HAVE AN APP?

WingMate is a web based application that may be used by anyone, using any browser, on any platform; no downloading required! Whether you are the tag owner or a finder, WingMate may be accessed from anywhere that there is an internet connection. WingMate may be saved as a home screen icon, just like a native app, on any IOS or Android device.

Aviation apparel and gear for pilots at all levels that is unique and quality made: this is what we do at Pilot Expressions. Each of our original designs are thoughtfully created to not only be fun and expressive, but also accurate in their representation. We want our aviation and pilot related gear to be a product you will proudly display wherever you travel. Our apparel is selected to be the most comfortable to wear around the hanger or around town. Our flight crew luggage tags and keychains are like no others around—vibrant and inimitable; and some are even smart enough to put your items on a Google map when found. Our airline crew luggage is of the finest quality that is no match for even the most aggressive baggage handler. No matter what pilot supplies you are searching for, you can trust Pilot Expressions to offer genuine products that will last and that you will love.

Looking for the perfect aviation gift for a pilot? Look no further than PilotExpressions.com. From cool aviation related apparel and accessories, to high quality airline crew luggage, to the best aviation headsets; Pilot Expressions has a unique product for the private pilot to the airline pilot, and all aviation enthusiasts in between. 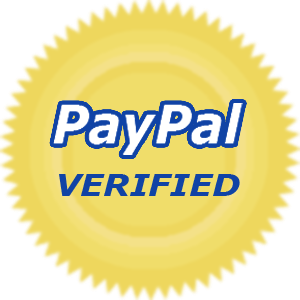 WingMate is a Registered Trademark of Pilot Expressions. 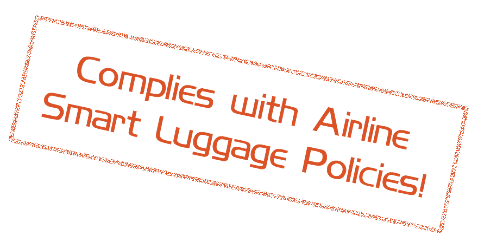 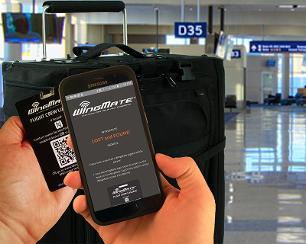 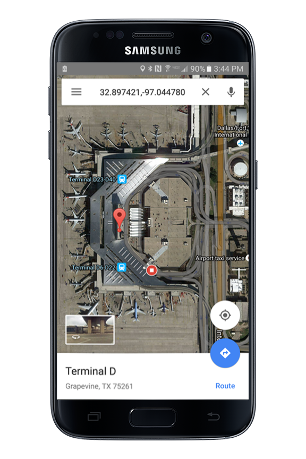